This project was created in 56 hours during a Major League Hacking competition. It is a twitter bot that uses Markov Chaining to create tweets based on currently trending tags. It scrapes tweets on a selected tag, along with images and hashtags, and creates the "perfect (read: most average) tweet". It also uses the Google Vision API to gather information on images to add the most relevant image.

Project is hosted on GitHub 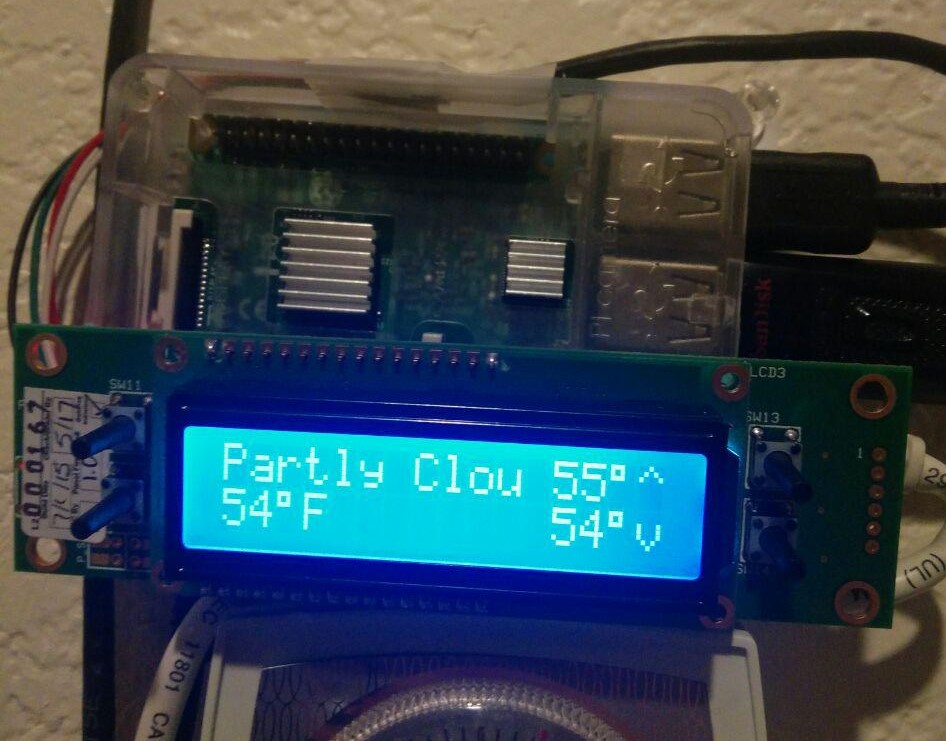 A project created by Alex Gittemeier and I over about three months during the spring 2019 semester. Because Midwestern weather is liable to change on a dime, we got tired of having to dig out a phone or wait for a webpage to load to be able to get a quick glance at the forecast. It was created with convience in mind. It is programmed primarily in Ruby and uses Dark Sky for weather information, which provides a lot of useful information, such as weather alerts issued by NOAA. The whole project is comprised of a Raspberry Pi 3 and a dot-martix display harvested from an Acellus server. Despite the fact that the original software used to control the panel was closed source, the software was reverse engineered, allowing for full control of the device.

Current functionality is light, but useful:

This project was a collaboration in a small team of three as a final project for an IoT course. Morning Paper is, at it's very core, a Particle Photon connected to a thermal printer. It's purpose is to offer someone a quick to-do list before leaving their home. At it's final proposal stage it supports weather forcasts and to-do lists. It's fully supported by a back end written in Ruby, with plugin support. The device itself is programmed in C++.

The main inspiration for this project was an annoyance with the way that virtual shopping lists work. First off, a modern smartphone is an expensive and usually fragile device. Pulling out your cell phone in the middle of shopping is a tedious task. We thought fumbling with a phone is way more trouble than it's worth. We wanted to bridge the "add items anywhere" aspect of an online shopping list with the recyclability and low cost of a piece of paper.

Credit to the team: Alex Gittemeier and Keenan Piveral-Brooks. Two of the most talented individuals I've worked with. The sheer amount of polish this project ended with could have not been reached without their work.

This is an example game that I put together for my Intro to Game Development course at Northwest Missouri State University. It utilizes assets provided by Godot (the engine creator) and other places. Check out the repository on Github! It's not much, but I thought it would be neat to host a game on here.

This website (as in, literally the one you're looking at) was created as a fun way to break from the overly too-scared-to-deviate-from HR Standard resume. Over time it's evolved to add more projects, but I decided I should try my hand at making the website itself a project. The main goal of it was to learn a new web technology. It's a Spring application serving static pages with Thymeleaf, because recreating the pages in something like React would be a massive undertaking for the time and energy that I currently have to spend.

I decided to take the pick-your-own-adventure route and use Gradle, as I've had some experience with Maven. That wasn't a very fun choice, purely because it seems everyone on Stackoverflow, every tutorial author, and practically everyone else on the internet used Maven. Slightly annoying, but the challenge was nice. I think I could find more exhausting ways to spend 6-8 hours, but not a bunch more that are as rewarding.